The Sum of All Fears--Lost Luggage

63 degrees, heading toward 88 this afternoon. If July's heat wave and drought was brutal, August has been uncharacteristically benevolent, with gentle rains and milder than usual temps here in the Ozarks.

"You can tell a lot about a person by the way (s)he handles these three things: a rainy day, lost luggage, and tangled Christmas tree lights.” ― Maya Angelou

It's Maya's middle minor catastrophe that has me worked up today.

I've watched a couple of YouTube vids lately about cruisers who made it to the ship...without their luggage. One Texas couple arrived in Southampton, UK to board a ship for Iceland with nothing but the clothes they were wearing. All their luggage was still in Dallas. I followed them online for several stops and even once they reached Reykjavik, their bags had only made it to Heathrow, but no one seemed to know where the luggage was exactly...The likelihood of it ever catching up to the cruise fizzled to zero.

It's no fun to wash out your one pair of undies in the sink each night and hope they're dry enough by morning to wear again.

So in preparation for our upcoming 21 days on the Holland America Eurodam, I'm doing a practice pack of my carry-on. I know some people who can live for six months out of a 14 X 9 X 20 inch bag but I'll be happy if I can manage several days. To that end, I've developed a mini-capsule wardrobe. Here 'tis:

I'll be traveling in navy pants, a navy tank topped with a navy shirt, my red raincoat (we are embarking in Seattle, after all!) and blue walking shoes. If I'm creative, I could have enough outfits for over a week, including some that will allow me to muddle through on formal nights. I could probably pack more pieces, but I have to leave room for other essentials in the bag.

Prescription meds are a big deal. I was appalled when the couple on YouTube admitted they'd packed theirs in their checked bags. It's an invitation to trouble I dream not of.

I take 8 different maintenance meds, one that requires 4 doses a day--11 pills in all, and that's if I skip my vitamins and such. It's okay. I'm thankful for every one of them. I share this because I want to encourage others who rely on medications. You don't have to avoid cruising because you aren't a marathon runner in the pink of health. My prescriptions keep me going, but they take up a lot of luggage space. I'll have a week's worth in my pill minder, and a month's worth (just in case of emergency) in their original bottles. I'd love to take one big bottle, count out the pills and put them all in one, but I don't think the TSA would be happy to see a bunch of different colors and shapes in one container without proper documentation on the side of the bottle.

I always travel with a mini-medicine chest--Tylenol, Advil, scopolamine patches, band aids & antibacterial ointment, tums, sudafed, cough drops, etc. And a small sewing kit as well, though that may have to take its chances in our checked bag.

And we'll want at least one of our computers, maybe two. I doubt we'll buy an internet package. We sort of hope to unplug for this trip. But the DH is awfully clever about creating a hot spot on his phone when we're in port, so I'm sure I will be blogging.

Then I'll also need to pack my war paint (make-up), electric toothbrush, and toiletries in their neat little 2.5 oz containers. My passport & CDC vaccination card fit neatly into a small zippered compartment, along with a little leather holder for my driver's license, the credit card we'll be using, & cash for tipping. I never carry a purse.

Suddenly, my carry-on is quite a lug. But then I also have a few other things that must travel in the airplane cabin with me...my cpap and all its accoutrements, Herkimer (my big portable oxygen concentrator that rolls like a mini-carry-on) and Percival (my smaller "back-up" POC that, fittingly, travels in a a backpack or his over-the-shoulder bag shown below.) 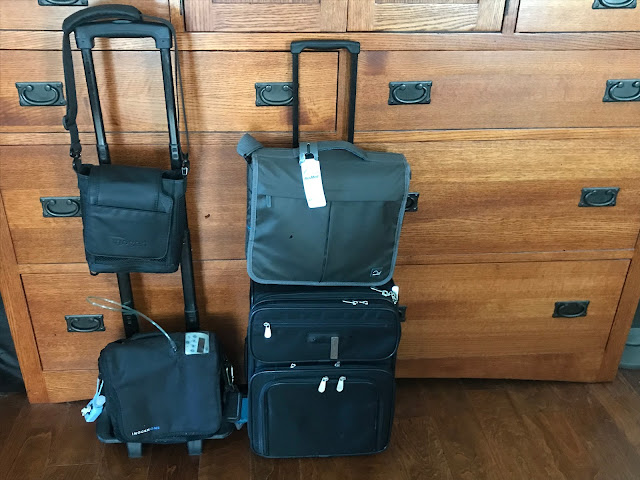 This is my version of "carry-on." Fortunately, the cpap and POC's are considered medical equipment and do not count against the number of pieces I'm allowed to slog down the jetway. Technically, I could still waggle on another "personal item," which I've seen other travelers interpret as a pretty spacious weekender type bag, but I'd need another hand if I tried it. These four pieces will tap me out.

And the DH is doing his part, as usual. He'll be wearing a big backpack filled with my spare POC batteries (4 in all, very heavy!), power cords, chargers, additional cannulas, power converters so we can make use of the European outlets, and other knick-knacks and scarcities that become so very crucial when you realize you don't have them.  He'll also have his carry-on (packed with the mini-capsule wardrobe I plan to help him pull together. It'll be a challenge because men's shoes are so much bulkier than women's sandals) along with his cpap.

The idea of making it to the port in Seattle without our checked luggage is still the stuff of nightmares. However, if we have to make do with only the things we carry on the plane with us, we can still be happy campers on the Eurodam.

At least I won't be washing out the same two pairs of undies in the sink every night!

Join my DH and me as we prepare, plan and dream of another 'round the world adventure!

Where in the World is the Viking Star?

Having Trouble Leaving a Comment or Following by Email?

My Other Travel Blogs